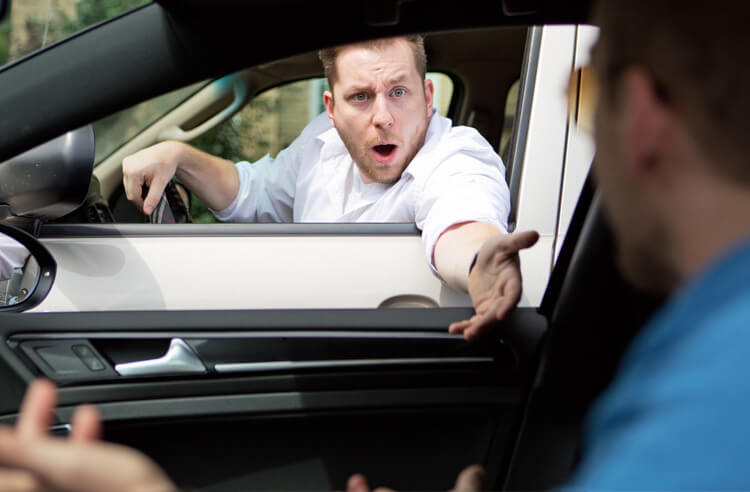 How to Deal with Road Rage

Resources
Driving Tips
How to Deal with Road Rage

When you’re sitting in traffic, running late for an appointment and someone tailgates you or cuts you off, it can be hard to keep your emotions in check. Tempers run high out on the road and obscene gestures and blaring horns can become a part of the daily commute. For your safety and the safety of those around you, it’s important that you keep your calm when you’re behind the wheel and do your best to avoid this type of behaviour and not react to aggressive drivers. Here are some tips to avoid road rage and keep your cool.

Take your time: Whether you’re driving to work or taking a trip to the grocery store, don’t rush. Give yourself plenty of time by leaving early and having realistic expectations. If you’re running late, accept the fact that you’ll probably be late. You can’t make up time on the road and if you try to, you’ll only stress yourself out.

Forgive and forget: Understand that drivers are humans and they make mistakes. If another driver almost hits you or pulls out in front of you, be thankful that an accident didn’t happen and move on. Don’t take these mistakes personally and don’t overreact. Wild gestures or yelling will only work to get everyone heated up and angry.

Use your horn sparingly: The purpose of your horn is to alert or warn other drivers of your presence. It’s not an instrument to vent your frustration. Even a polite honk can be taken the wrong way so only use your horn when it’s absolutely necessary.

Don’t aggravate other drivers: You can’t expect others to follow the rules of the road if you don’t. Be courteous to other drivers and communicate your intentions. Use your signal lights, don’t tailgate, don’t putt around in the passing lane, don’t hog the lane and drive a steady, even speed.

Tips to deal with road rage

While you can’t control the actions of others, you can control the way you react. Prevent road rage with the following tips:

Let it go: If someone gestures at you, cuts you off or tries to engage you in a race of sorts while you’re behind the wheel, let it go. Slow down if you need to or take another route in order to avoid their wrath. You can’t control the way aggressive drivers behave, but you can control how you react.

Report aggressive drivers: If you find you can’t escape an angry driver or you fear for your safety, go to a police station or a public place, if there isn’t a station nearby. Don’t pull over and get out of your car or drive home as you could be followed.

Driving is a big responsibility – you’re behind the wheel of a powerful vehicle that can easily harm or injure others. Following the rules and driving in a safe and controlled way helps ensure that everyone makes it to their destination.